Roll over image to zoom in
Click to open expanded view

Add to wishlist
Compare
Categories: 360 / VR, Cameras
A camera that can shoot 360-degree spherical images in a single shot. The “RICOH THETA V” is a product with a body based on the concept of being compact, lightweight and easy to carry around anywhere. Furthermore, it achieves high-speed transfer that can comfortably browse large volumes of data, high sound quality recording compatible with 360° spatial audio, and shoot equivalent 360-degree 4K video. The camera can also connect to a smartphone or tablet using either Bluetooth or wireless LAN to allow for flexible operation based on how the camera owner uses it. In addition, this product has a highly expandable body design so that it can receive future performance enhancements through firmware updates after it has launched, which results in a fitting high-end model camera. Main Features:
– High-resolution 360-degree spherical still images and video – 4K compatible high resolution 360-degree video – High-speed data transfer – Support for 4K 360-degree live streaming output – 360-degree spatial audio recording – Bluetooth and wireless LAN dual communication – 19 GB… “Remote Playback” to enjoy 360-degree image on a large screen monitor – Functions can be added using plug-ins – Underwater housing that is waterproof up to a depth of 30 meters (equivalent to JIS Class 8 waterproof standard) to achieve 360-degree underwater shooting

Bringing innovation to the imaging experience. Record and recreate the real world in 360 degrees.

Resolution has been further improved and high quality delivers a more natural three-dimensional experience and coloring. 360 degrees spatial audio lets you record sound from all directions. Realistically record images and audio of the world surrounding you as far as the eye can see to recreate inspiring moments. 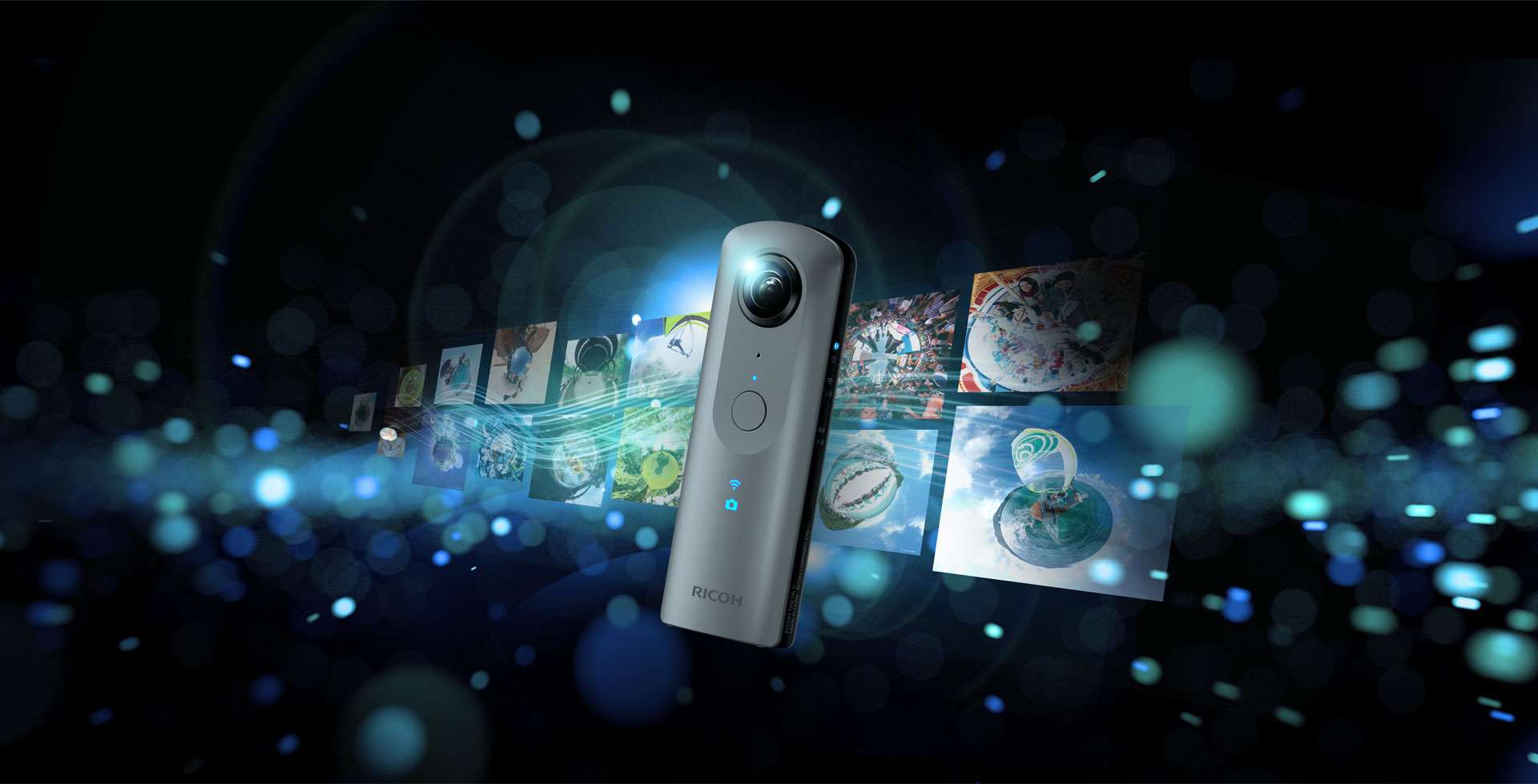 Main processor NEW
The Qualcomm(R) Snapdragon(TM) is used as a main processor. It delivers a variety of improvements including faster image processing and wireless transfer speed, and power saving capabilities.

High-performance 4-channel microphone NEW
Four built-in microphones make it possible to record audio independently from four directions. This is then converted to a format that recreates natural 360゜spatial audio.

Exclusive external 3D Microphone TA-1 (Optional) NEW
This is a four-direction, 360゜spatial audio microphone designed specially for the THETA V. Use it to record even higher quality audio with a more realistic feel. 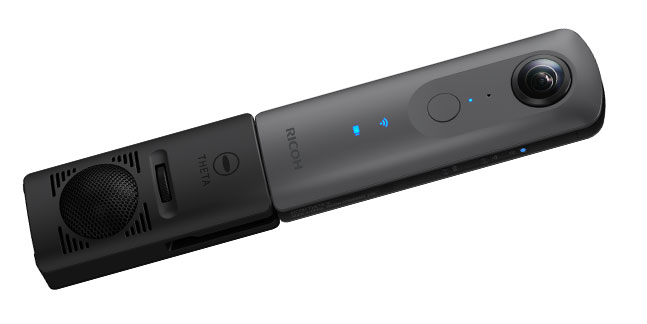 World’s first*2 Remote Playback*3
Image data recorded on THETA V can be played back in 360 degrees on a monitor such as TV. The THETA V also functions as a remote control which can be used to select the image file and move displayed 360 degree image up, down, left, and right. It can also zoom-in and out

*2 As a consumer-oriented spherical camera (According to Ricoh research).

*3 Other devices are required, including the separate wireless display adapter.

Equipped with a Gyro sensor NEW

This model is equipped with a new gyro sensor in addition to the conventional acceleration sensor. Tilt detection precision as been significantly improved, along with top/bottom correction precision enhancements and the ability for Remote Playback

This is an authentic waterproof housing with JIS Class 8 equivalent protection class for shooting underwater to 30 m. The housing features AR anti-reflective coating and dirt-resistant coating.

Advanced image processing technology cultivated over the years in camera development deliver image quality with minimal loss of shadow detail and highlight blowout even in scenes with varying levels of contrast. The white balance algorithm has been completely retuned to achieve natural hues for a wide range of scenes.

The minimum shooting interval is 4 seconds. This enables a greater range of use when creating time lapse videos

In addition to wireless LAN, Bluetooth is now adopted for constant connection*4 to your smartphone. Enjoy instant remote shooting and change shooting settings wherever you are. *4 When sleep mode is activated, you can shut the camera off by holding the power button.

Communication speed for both still images and videos is drastically improved. The maximum data transfer is approximately x2.5*6 faster than that of conventional models. 6* Compared to THETA S. Actual measured value of time required to transfer data to an iOS device with video data of the same size. According to Ricoh research.

A new system based on the Android OS is used on this mode. Adding plugins to the camera makes it possible to expand various features. *7 The Remote Playback function is a pre-installed plugin.

Compact and slim. The THETA design delivers both high-quality 360 degree image shooting and ease of use. 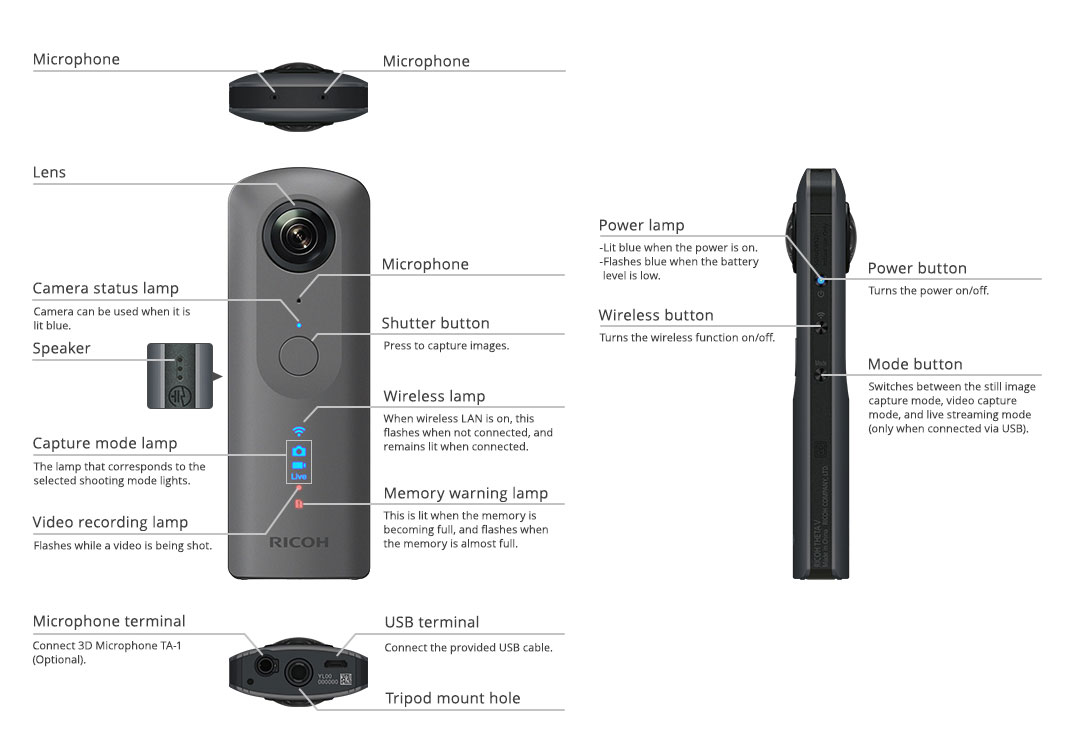 Be the first to review “RICOH THETA V” Cancel reply

There are no reviews yet.